MICRO/SMALL LAYOUTS FOR MODEL RAILROADS
It is a railroad model site of world-famous U.S.A. which it introduces mainly on Small layout.

A KARAKURI layout was carried by 15 October 2010 issue.
（Small Layout Scrapbook PAGE 102a-October 2010)
It sent back to the page top
Copyright ©2004, Yutaka Nakai All Rights Reserved.

Osamu Hatagawa of the Adviser Car Race.
It is the person whom my son respected in the Formula4 Racer time. 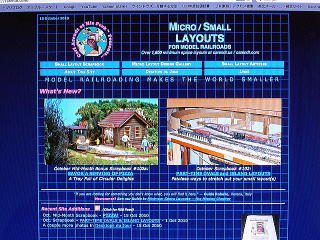 It was presided over MICRO SMALL LAYOUTS, and Mr.Carl Arendt which was a physicist passed away on last March 4, 2011.
I had talked only by an email, but it was splendid good nature always called from the contents, and to be able to know.

I regret it heartily.

Unfortunately most of HP cannot look now.
It is that it is made an effort so that volunteers can restore, but, as for the time, it seems to be not yet decided it
22 Mar.2011  Yuta

☆ On March 27, 2011, a site seems to have been able to revive thanks to the effort of volunteers.
Volunteers engaged in restoration as a fan of the sites delightfully, thank you.
However, it seems to be not yet decided whether site continuation is possible.
27 Mar.2011 Yuta.

It is the homepage of a senior Mr.Masakatu Hatagawa
enjoying a railroad model together.
We push forward a module with the scenery of the standard called
the HN system module together.